One of the initial contributions by Russia to the International naval fleet sent to Crete in 1897 was the Pre-Dreadnaught battleship ‘Sissoi Veliky’. The ship had been a floating disaster since the very beginning, suffering from numerous design, engineering and construction faults. 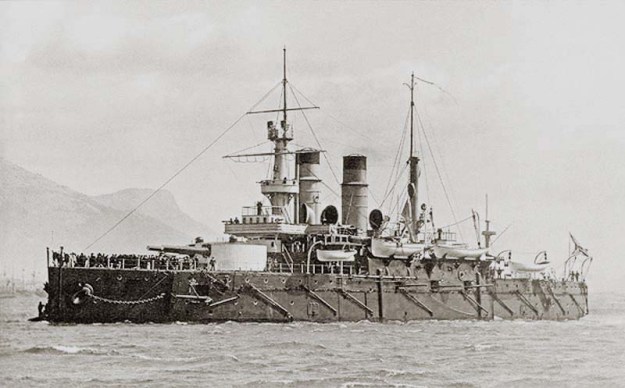 Matters came to an unfortunate head on 15th March 1897 when on a routine target practice, the rear turret of the battleship exploded, killing 16 men instantly, another six dying later of their injuries. The reason for the explosion was later put down to the crew disabling a faulty safety mechanism, and the incompetence of the turret commander.

Burial of Russian seamen from Sissoi Veliky. The Graphic 3 April 1897.

Seven years later, according to Second Lieutenant W. D. Downes, 2/Royal Sussex Regiment, who served on Crete with his battalion in 1906, matters did not appear to have improved that much.

“On the day I arrived at Canea, the Russian Cruiser left Suda Bay in order to take Prince George of Greece back to Athens. On her way out she ran down the Italian Cruiser and almost sunk her. As the harbour is said to be large enough to hold an entire British Fleet; such a thing has never happened before in the history of Naval navigation. The Russian torpedo destroyer then came to tow the cruiser into shallow water. The Captain of the destroyer wished to take her, to the only part of the harbour where there were rocks; the truth of the matter was that all of the officers of both Russian Destroyer and Cruiser were drunk; so bad were they on the destroyer, that the Italians sent one of their own Officers to take charge of the Russian Destroyers, and thus get their Cruiser into shallow water before she sank. An Italian Naval Officer told me that the only safe time for a Russian ship to leave harbour is early in the morning; 11a.m. is too late according to him, for they are seldom sober after 10a.m.

Another anecdote to show the inefficiency of the Russian Navy, was told to me by the same Officer, About three months before my arrival, the Russian Destroyer received orders to go to some place on the Greek Coast. They had no charts to show them how to get there, notwithstanding the fact, they were on duty in these seas. The Navigator had to apply to the Navigating Lieutenant of H. M. S. Venus to allow him to take a tracing of the Charts of these waters. It is not surprising therefore how easily the Japanese were able to deal with the Russian Navy.”

The illustration shows the naval escort provided by the four Powers, France, Britain, Russia and Italy, to bring Prince George of Greece to take up his role as High Commissioner for Crete. Appointed only after diplomatic wrangling which went on for a considerable time after the decision to make Crete an Autonomous State under Ottoman suzeranity, his arrival on Crete in December 1898 was delayed further by arguments over his mode of transport and the flag he was to fly.

The original, Greek, proposal was that he be taken to Crete from Greece in a Greek warship, a suggestion which met with approval only from the Greeks. The next, Greek, proposal was that he be taken to the island in a civilian vessel flying a Greek flag; again only the Greeks found favour with this. Eventually he was told that he would be taken to Crete in a European warship escorted by other European warships, flying their respective flags; making the point to all concerned, including George, although later events would show he appeared incapable of getting the message, that his, George’s, appointment was made by the power and authority of the four Powers and no one else.

There was however, a last minute hitch when an argument broke out over the nature of the flag of the newly autonomous island. The symbolism of the flag eventually chosen referred to religious distribution of the population of the island; three quarters Christian represented as a blue field enfolded in a white cross, and one quarter Muslim, represented by a white star on a red field.

Flag of the Cretan Autonomous State. Shown on a souvenir card c.1902.

The initial proposal put forward by the Committee of four Admirals from the Powers who were effectively ruling the island prior to George’s arrival, possibly at the suggestion of the Russian Admiral, was that the flag would consist of a the same blue field, white cross and red upper left quarter BUT that instead of the Muslim star, there would be a further white cross. 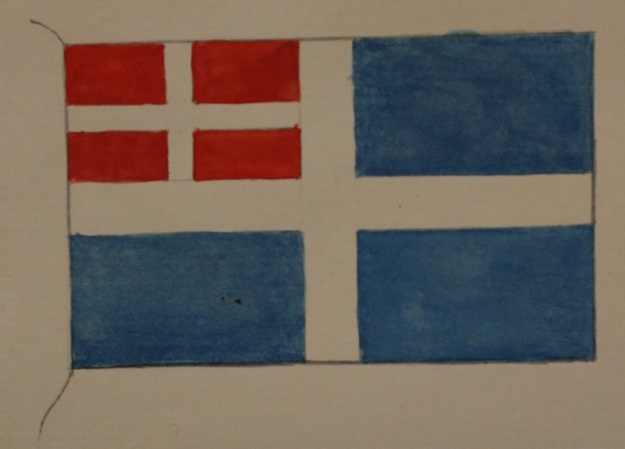 The British Ambassadors in both Constantinople and St. Petersburg (Leningrad), raised objections to the proposal pointing out that it would be viewed by the Ottoman authorities and the Cretan Muslims as a provocation, since it could, and probably would, be interpreted as indicating Christian dominance of the Muslim population.  The idea was dropped, although this ‘illegal’ version of the flag of the Cretan Autonomous State did still appear on the island on at least one occasion.

The first British troops to land in Crete were Royal Marines landed from H. M. S. Revenge at 3.15 p.m. on 15th February 1897; followed shortly afterwards that afternoon by parties from H.M.S Barflour and H. M. S. Rodney. The duties of the sailors and marines  centred on patrolling both Canea and the surrounding countryside in order to keep Cretan Christian  and Cretan Muslims apart. The illustration above shows ‘Bluejackets’ from H. M. S. Anson and appeared in the Illustrated London News on 1 May 1897.

On 21 February 1897, European warships opened fire on Cretan Christian insurgents camped at Halepa, Canea, who were threatening to open fire on the town. Although the bombardment didn’t last long and the Cretans withdrew, hauling down the, then illegal, Greek flag from the flagpole, the alleged actions of Spyros Kayales did generate their own mythology.
Needless to say, the European view of events was slightly different from the Cretan Christian view.

French and Russian warships off Canea. 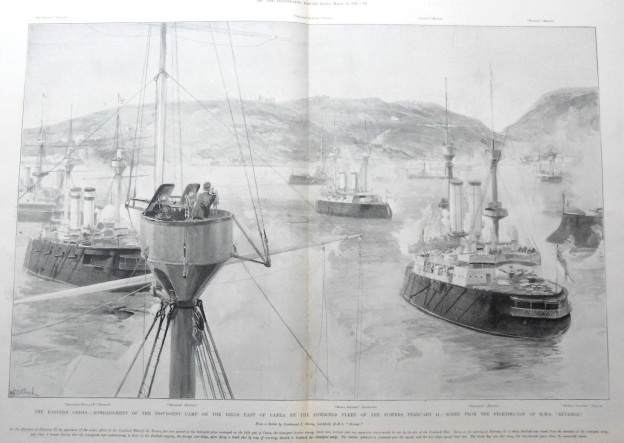 Bombardment as viewed from British ships. 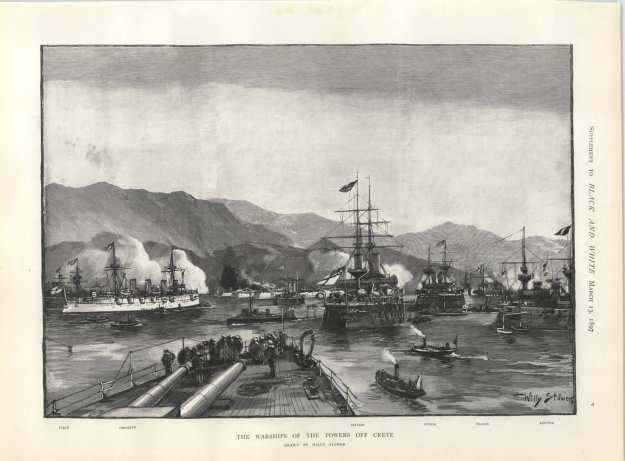 French view of the results of the bombardment.

The illustration shows the events of 21 February 1897 when European warships opened fire on Cretan Christian insurgents who had hoisted a Greek flag and were threatening to bombard Canea from the hills above the town.

In spite of being instructed to haul down the flag, Crete was then part of the Ottoman Empire and Greece was attempting to annex it without the consent of the European Powers who guaranteed the Greek and Ottoman borders, the Cretans refused. When it became clear that they possessed artillery, given to them by Greek troops who had landed in Crete  a few weeks earlier, the Europeans opened fire on the insurgents’ position. After a few minutes firing from the warships the flag came down and the Christians withdrew. More details here. 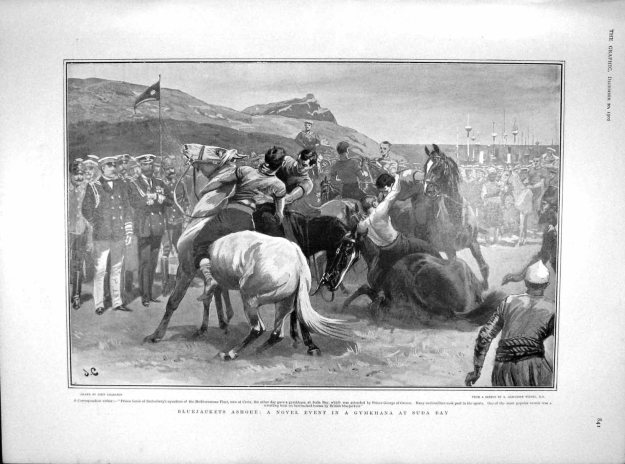 British sailors putting on a display for two Princes… who don’t seem that impressed.

The event took place on what is now the site of the British and Commonwealth War Cemetery at Suda Bay…at that time it was a golf course built by the British (Scottish?) troops.

On 21 February 1897, Cretan Christian rebels, amongst whom was Eleftherios Venizelos, a future Prime Minister of Greece, occupied the heights outside Canea and threatened to open fire on the city with artillery recently landed from Greece. On been instructed by the European Powers to take down the Greek flag that they were flying, the rebels refused and as a consequence the fleet opened fire on them.

According to the Royal Navy’s report on the incident:

‘Three common shell were fired from a 6 inch gun from Her Majesty’s ship “Revenge” at 4.700 yards, all three shells bursting in a walled farmstead which formed the base of their outposts on the ridge of the hill above the town. The gun-vessels fired sharpnel and common shell; the French and Italian ships did not fire as their guns were masked by other ships.’

The rebels withdrew without firing on Canea having suffered three dead and a number wounded.

(The illustration, which appeared in The Graphic on 13th March 1897, appears to have been reversed in printing since the rebel’s position was, in reality, to the east of Canea i.e. to the left of the city viewing it from the sea. The International bombardments to the west of the town were for the most part carried out by much smaller gunboats.)

Scenes off the coast of Crete