The matter of Crete in the late 1890s wasn’t just of interest to the immediate players on the island, to Greece, the Ottoman Empire and Western Europe; it was also of interest to those within, and on, the borders of Iran and Russia.

The cartoon below, “No need to get too hot”, was published in the Azerbaijani satirical magazine “Molla Naasreddin.” The cartoon shows Britain, Russia and, possibly, Italy, forcing the Ottoman Empire to take a shower by a sign saying, Krid Melelesi,  which appears to translate from Turkish into the phrase ‘The Matter of Crete’. The image is undated but the magazine was set up in 1906 so it presumably relates to events post that date. 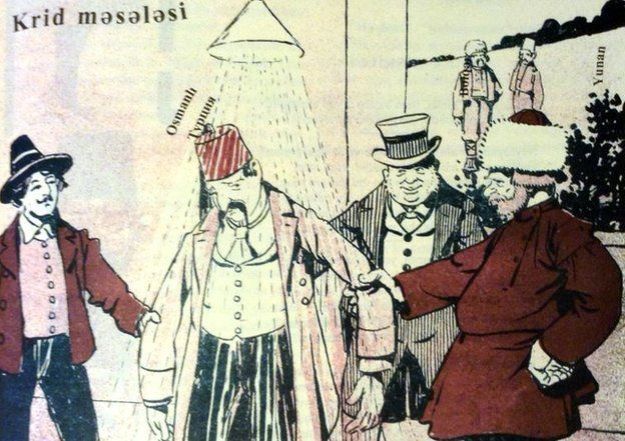 Further details of the magazine, which apparently took a similar approach to the politics and religion of the era and area as French satirical magazine Charlie Hebdo, can be found at; http://www.bbc.co.uk/news/world-europe-31640643

An interesting example of the Edwardian military’s’ approach to medical ethics, or lack of them, was highlighted in a report contained in the 1911 Navy (Health) Statistical Report of the Health of the Navy for the year 1910. Entitled ‘Phlebotomus Fever in Crete’ and written by two naval surgeons, Fleet-Surgeon L. Kilroy and Surgeon G. Adshead, it recounted the attempt to determine the cause of a small outbreak of phlebotomus fever – sand-fly fever- on board H.M.S Diana while stationed off Canea as part of the International fleet presence.[1]

Part of the duty of the ships on the Cretan station was to supply a small, six man, guard for Suda Island, a small island on the entrance to Suda Bay, on which stood ‘…many ruined buildings and fortifications, some modern, some dating from Venetian times and all built of sandstone and plaster.’[2] The men lived in a two-room single story house while on the island and were equipped with ordinary mosquito netting. (The guard was required because while Crete had been autonomous since 1898, it was still nominally under the rule of the Ottoman Empire and as such the Ottoman’s retained the right to have their flag flying on Crete; a right they insisted upon. So objectionable was this right to the majority of Cretans, and so much grief having been caused over the issue of flags on the island, that the only place it could be flown was on a normally uninhabited island; and then only under the protection of European troops.) 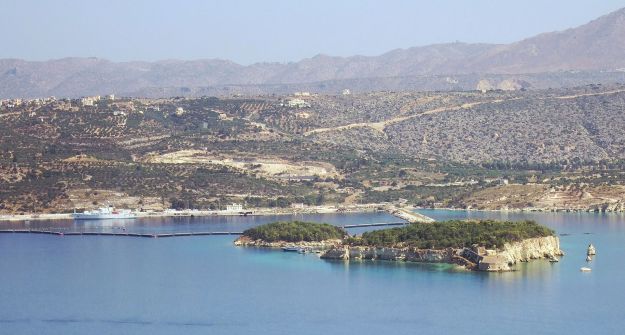 During the Royal Navy rotation on the island in May/June 1910, no cases of Phlebotomus Fever were reported but on returning to the ship, two case developed. On returning to Suda in July, two further cases were identified among sailors who had visited Suda village. During the period of the next British guard on the island, a tour cut short by the ship being ordered to Malta, four out of the six men contracted the fever within the four days spent ion the island. Returning to Crete in August the British naval surgeons discovered from their French counterparts that during the 14 days the French had been on the island, 14 out of the 19 men stationed there had all succumbed to the fever. The Italians, who had preceded the French in providing the island guard, reported no cases; but their medical officer told the authors that they used nets.

According to the authors of the report; ‘…it was decided to try to protect efficiently our men…and at the same time conduct a control experiment.’ Tents fitted with butter muslin doorless linings which were buttoned to the sides of the tent, theoretically making them sand-fly proof, were issued to the men and the importance of maintaining the integrity of the butter-muslin lining was impressed upon them. Fleet Surgeon Kilroy accompanied the party and, sleeping on the beach outside the tent, by the light of the moon, captured many sand-flies from his left arm; in all over 100 scars were counted on his arm. (Attempts to gather the sand-flies in muslin netting proved to be inefficient, the bare arm procedure proving the most successful.) The first two nights were windy so relatively few flies were around, but the remaining three were calm and the sand-flies so prevalent that he had to resort to using a butter-muslin net to get any sleep. The sixth night there was a storm and Kilroy was forced to share the men’s tent. For the first 5 days he showed no sign of any illness, but on the afternoon of the sixth day he came down with the typical symptoms of sand-fly fever.

On returning to the ship, various blood tests were carried out, and on the third day of his illness it was determined that Fleet Surgeon Kilroy, unsurprisingly, did indeed have sand-fly fever.

However, it appears that prior to confirmation of that diagnosis, on the second day of Kilroy’s illness, the two doctors involved in the experiment, Kilroy and Adshead, took matters a step further. ‘[A] vein in [Kilroy’s] left arm was exposed, and 4 cubic centimetres of blood withdrawn from it and injected subcutaneously into the forearm of Sick Berth Attendant P. H. Morrish, who willingly volunteered to be experimented upon.’ (Current author’s emphasis.)

After a week Morrish came down with the symptoms of sand-fly fever. However, fortunately for him, the episode only lasted for 36 hours, but sufficient time for Kilroy and Adshead to become ‘…of the opinion that this was a true reaction.’

No further mention of the fate of the brave Sick Berth Attendant Moorish is made in the report which, after mention of two further cases of the illness known to be connected to sand-fly bites, stated that the men who were on the island with Kilroy all avoided the disease, being ‘efficiently protected’ by their butter-muslin netting. No records of current cases of sand-fly fever on Suda Island are available; the Island is within the perimeter of the NATO facility in Suda Bay and off limits to civilians.

[1]Phlobotomus fever, also known as sand-fly fever, three-day fever and pappataci-fever, is an acute, infectious, febrile disease caused by a phlebovirus (family Bunyaviridae) and producing temporary incapacitation. It is transmitted to humans by the bloodsucking female sand fly (notably Phlebotomus papatasii, P. perniciosus, and P. perfiliewsi). The disease produces flu like symptoms including fever, headaches, painful joints and general debility. The fever generally lasts up to three days, and the other symptoms generally up to 10. It is rarely, if ever, fatal. http://www.britannica.com/science/pappataci-fever

[2] This, and all subsequent quotes from: 1911 (264) Navy (Health) Statistical Report of the Health of the Navy for the year 1910. Phlebotomus Fever in Crete. Fleet Surgeon L. Kilroy, Surgeon G. Adshead.

In December 1898, the European Powers finally decided that Prince George of Greece, the second son of the Greek King, should be imposed on the Cretans as the High Commissioner of the island, the Cretans having been given no say in the matter. *

In spite of George being a Greek Prince, and theoretically therefore expected to be welcomed by the majority of the island’s population, the British at least were taking no chances on the nature of his reception by the Cretan population; a sailor who was part of the European reception party/bodyguard writing at the time: 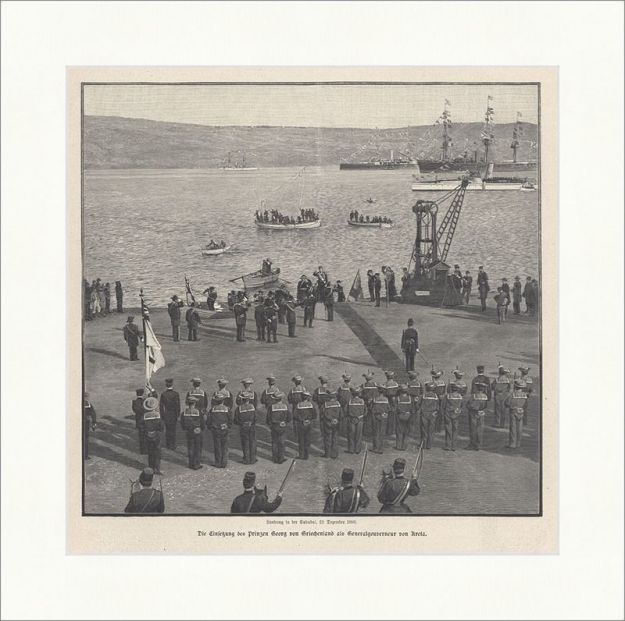 The arrival of Prince George in Suda Bay. German print. Note the British sailors, presumably armed with 40 rounds each. 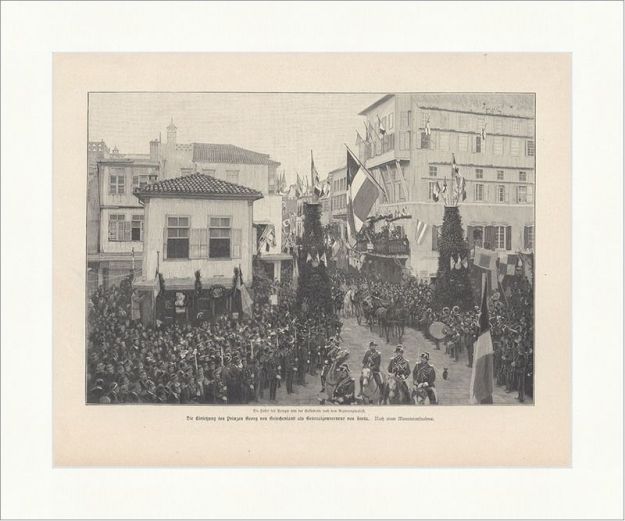 The entry of Prince George into Canea. December 1898. German print.

*This followed the pattern of European involvement in creating or restoring Greek monarchs. The first modern King of Greece, Otto, was a Bavarian prince chosen by the Concert of Europe; when the Greeks threw him out in 1834, the Concert gave them Prince Christian William Ferdinand Adolphus George of the Danish Holstein-Sonderburg-Glucksburg line to reign as George I. As late as 1944, the British Government and army were involved in supporting the eventual reinstatement of King George II who, after enthusiastically supporting the extreme right-wing Metaxis dictatorship prior to the German invasion, had been in exile throughout the war.

** National Maritime Museum JOD 207. Dairy of Thomas Willis A. B.  H.M.S. Dido. Spelling and punctuation as original. Willis appears to have got the landing place incorrect; George landed at Suda Bay, Canea on 21st December 1898; he didn’t go to Candia (Iraklion) until mid-January 1899.